Volunteers nationwide perform extraordinary service in support of their opera guilds, leagues, companies and opera in general.   Opera Volunteers International itself created the BRAVO Award to pay tribute to individuals who make outstanding and unusual contributions in service to OVI.

OVI Board member and Resources Chair Rose Betty Williams asked, “What does your support group do to honor its volunteers”?

From Rose Betty Williams of the Austin Lyric Opera Guild:

The award is not monetary. In the last two years, the award presented has come in the form of beautiful 10-inch high triangular-shaped heavy crystal pieces etched with the honorees’ names and placed on marble stands.

From Rebecca Bowne of the Opera League of Los Angeles:

The Opera League of Los Angeles holds an annual Volunteer Appreciation night to honor all the League volunteers who have served 20 hours or more during the year. There is a written program listing volunteers by categories of hours. The event features refreshments and an in-depth interview with a well known opera personality (usually one of the key singers in a production). The chair of each major volunteer area (Education, Boutique, Gatherings, Speaker’s Bureau, Artist Services, Cast Dinners) talks about major accomplishments for the year, with a computerized slide show, and all the volunteers from that area stand for applause.

Each year, different “goodie bags” are created for each volunteer; some years we have tee shirts, other years a special gift of an opener/knife, always with the League logo on it. In addition, there are opera posters, mugs, various gift items enclosed in the bag.

In years prior, we had a “overall volunteer of the year” or “key volunteer” in each major area, but this tended to focus on an individual instead of the accomplishments of the entire team of volunteers. From time to time as appropriate, special recognition also is given for outstanding service with an individual award and gift certificate.

Once a volunteer has worked 20 or more hours, they are given a permanent name badge with the Opera League logo. Each year, volunteers earning over 20 hours the prior year receive one dress rehearsal ticket, those with 21- 40 hours two tickets to one rehearsal, 41- 99 hours three tickets and over 100 hours two tickets to two dress rehearsals. The priority for selection among available operas and seating is determined by the number of hours worked.

In addition to the annual recognition evening, committee chairs have developed numerous special ways of recognizing volunteers. For Artist Services, there are awards related to opera for picking up a visiting artist in the middle of the night (Nessun dorma), carrying excessive baggage (Elektra – emotional baggage translating to real baggage), going to the airport (hell) twice in one day (Orfeo), and so forth, given with fanfare, a picture published on the web and an opera DVD or CD. At the Boutique, volunteers receive 25% off an item each time they volunteer, as well as an opportunity to see the opera in prime seats.

From Rhonda Sweeney of the Houston Grand Opera Guild:

Each year, the HGO Guild awards a Volunteer of the Year award to someone who has done a LOT for the Guild, generally not just that year but over several years.  A BRAVO award is given to someone who may not be a Guild member but is either on the HGO staff or in the community working hard on behalf of opera. 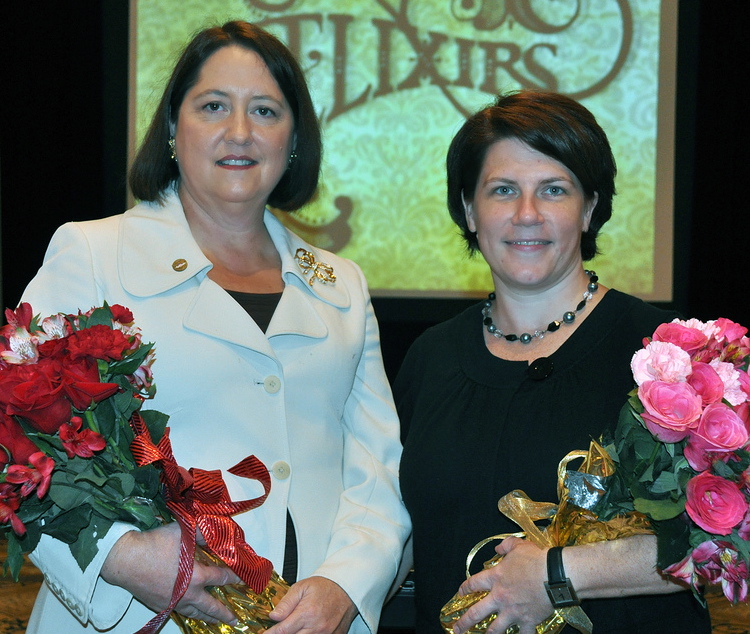 Volunteers of Distinction awards go to several Guild members who have contributed special talents. Rising Stars awards honor those new volunteers in their first or second years as volunteers at the Guild. These awardees are recognized at a brunch each Fall before the season opens, and in fact it is generally the first opera social event of the new season.

Get more information about the HGO Guild’s Awards on their website where all  honorees are listed. However, every few years we have named a volunteer to receive the Francis Robinson Award at our big fund raiser, La Bella Notte.

June Bogel, a past president of the Guild and a member of the Nashville Opera Board was the last honoree. Three of our members have also been nominated by the Guild Board and the company to receive OVI Partners in Excellence Awards.

The Des Moines Metro Opera Guild Council’s recognizes its volunteer honorees by putting their names on a plaque that is displayed in the lobby during the opera season.

Our most recent award winner is Dru McLuen, president of the Indianola Chapter of the Guild. For years Dru has been the “go to” Guild member. She sets up promotional displays at the local libraries, helps the office with mailings, and she helps coordinate volunteers for many Guild and company events.Read more about Des Moines Metro Opera Guild.

Since 1984 Kansas City Lyric Opera Guild has had a monetary award, funded by Dr. Revis Lewis and named the Revis Lewis Award in his honor. It is given at the Annual Meeting, held each year in June. The $100 award is presented to one or two Lyric Guild members who have served in an outstanding capacity.

In addition, the winners’ names are engraved on a plaque in our Guild Room at the theater. The award may be earned more than once. The selection is made by Dr. Lewis, usually in consultation with the President or other members of the Guild Board.

Dr. Lewis was one of the founders of the Guild, which had its first meeting in 1961 (We will celebrate our 50th anniversary in 2011). He served as president from 1975 to1977 and has been chairman of the board for many years. That position is defined in the by-laws as “senior advisor to the Board.” Dr. Lewis was the first KC Lyric Opera Guild recipient of the OVI Partners in Excellence Award.

This website uses cookies to improve your experience while you navigate through the website. Out of these, the cookies that are categorized as necessary are stored on your browser as they are essential for the working of basic functionalities of the website. We also use third-party cookies that help us analyze and understand how you use this website. These cookies will be stored in your browser only with your consent. You also have the option to opt-out of these cookies. But opting out of some of these cookies may affect your browsing experience.
Necessary Always Enabled
Necessary cookies are absolutely essential for the website to function properly. This category only includes cookies that ensures basic functionalities and security features of the website. These cookies do not store any personal information.
Non-necessary
Any cookies that may not be particularly necessary for the website to function and is used specifically to collect user personal data via analytics, ads, other embedded contents are termed as non-necessary cookies. It is mandatory to procure user consent prior to running these cookies on your website.
SAVE & ACCEPT