Since 1994-95, Opera Volunteers International has honored over 100 individuals and support groups who have made outstanding contributions to their opera companies and to their communities. Partners in Excellence recognition also may be extended to support groups to recognize an important milestone or achievement.  Recipients of a Partners in Excellence Award are recognized for their achievements at a meeting of the membership at an OVI Conference, and in OVI’s various publications.

Each Partner in Excellence has been recommended, in writing, by the president of an OVI member Support Group; two additional letters of recommendation are required from senior, appropriate, involved persons who are familiar with the individual or organization being nominated (eg, opera company general director or board president, music school department head, school district superintendent.) Nomination forms follow the listing of this year’s award recipients.

Silvia Lin has been nominated by the San Francisco Opera Guild for an OVI 2020 Partners in Excellence Award.

Silvia joined the East Bay Chapter in 1990 and was elected Chapter President in 1992, a position she continues to hold today. As Chapter President, she sits on the Board of Directors of San Francisco Opera Guild and served as the Guild’s Vice President of Chapters on the Executive Committee for during the 1990s and again from 2016 through 2019.

Silvia is constantly spreading the word about Opera and recruiting new members in her Chapter. Since becoming President, she has grown the Chapter from 60 members to 400. Each week she sends out opera news emails, listing opera-related events in the Greater Bay Area, and several times a year mails a newsletter. Her goal is to offer opera lovers opera-related events in the East Bay to get and keep them interested in opera. She also supports the Guild’s signature education program, Opera à la Carte, by serving as a docent in East Bay schools each year.

Silvia also supports San Francisco Opera’s Adler Fellowship Program and the Merola Opera Program, both personally and as a Chapter member. Through her tireless fundraising efforts, her Chapter has been able to contribute $10,000 to the Opera Center and between $3,000 and $5,000 to the Merola Opera Program annually. Additionally, the chapter has donated nearly $110,000 to San Francisco Opera Guild’s Education Fund Endowment since 1995.

Silvia’s love of opera and her efforts to support opera in her community have been nothing short of extraordinary. Her tireless service and exemplary leadership over many decades has distinguished her as a true Partner in Excellence.

Jeanette Segal has been nominated by Arizona Opera League of Tucson for an OVI 2020 Partners in Excellence Award.

Jeanette has been a devoted member of the Arizona Opera family since joining the board in 1998. She served one term as Board Chair, and 3 years 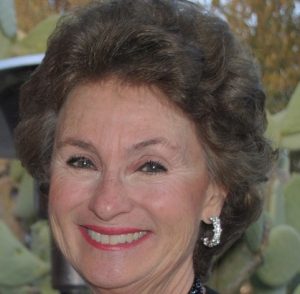 as President of the Opera League of Tucson. She has been active on multiple committees, including the development, gala and governance committees.

In addition to her incredible service to Arizona Opera, Jeanette currently serves as the President and Chair of the Tucson Desert Song Festival, featuring vocal music performances from some of the world’s greatest artists, presented in partnership with other Tucson performing arts organizations, in an annual recital series with Arizona Opera. Thanks in great part to Jeanette’s devoted leadership, TDSF’s reputation and reach continues to flourish. She is tireless advocate for the cultural richness of Arizona.

Jeanette never misses an opportunity to make those around her feel welcome, greeting everyone she sees with open arms and a friendly smile. She has generously opened her home on many occasions – everything from casual donor stewardship parties to elegant fundraising dinners. Whenever there is a need – no matter what it is – Jeanette always seems to be among the first to volunteer. She leads by example and her warmth, kindness and compassion inspire others to follow suit.

Jeanette often attends multiple performances of each opera in Tucson and nearly every Arizona Opera event. She is a perennial advocate, exemplifies dedication, and is equally loved by staff, artists, donors, and her fellow community members. It is Arizona Opera’s great honor to nominate her for this award for all that she has done for this company, the art form, and the opera field at large.

Gerry Aitken has been nominated by Houston Grand Opera Guild for an OVI 2020 Partners in Excellence Award.

Gerry’s dedication and volunteerism to Houston Grand Opera is extraordinary. She brings passion, expertise, professionalism, and care to

every effort in which she is involved and is a leader amongst her fellow Guild members as well as in the greater Houston volunteer community.

Gerry has served as the Vice President of the HGO Guild Boutique, the
Opera’s gift shop, for many years. Gerry manages all purchasing and inventory, the scheduling of volunteers to staff the boutique and the finances associated with the boutique.

In 2017, HGO’s home theater was flooded as a result of Hurricane Harvey and the company was displaced from the Wortham Theater Center for 14 months. Gerry  set up a display table in our temporary venue in order to continue selling t-shirts and gift items to patrons during this difficult time.

Early in 2017, HGO announced a six-year, multidisciplinary Seeking the Human Spirit initiative designed to highlight the universal spiritual themes raised in opera and to expand and deepen Houstonians’ connections to opera and to art. A partnership was developed with the Museum of Fine Arts, Houston (MFAH), to create growing programming for their book club tours that fit thematically with the Seeking the Human Spirit operas. Gerry agreed to spearhead the program and it has been so successful, it is one of the few partnerships that has been maintained in each year of the initiative. In 2019, Gerry traveled to the National Docent Symposium and presented to museum docents the success of the HGO and MFAH Seeking the Human Spirit Thematic Tours. Gerry took the initiative to apply and travel to this symposium on her own and was an exceptional representative of both HGO and the HGO Guild.

Mary Ann Strasheim has been nominated by Opera Omaha Guild for an OVI 2020 Partners in Excellence Award.

Ms. Strasheim is a distinguished woman who has been faithful to Opera Omaha for 44 years. She was the founder of the annual Cotillion 35 years ago. To this day, Cotillion remains the largest fundraising event for t

he Opera Omaha Guild. When she was approached to put a fundraiser together, she was asked for something that had community appeal, involved children, and would raise a large amount of money annually. Creating Cotillion was a huge success, not only for fundraising but as a life gift for the community! It reinforces the importance of etiquette, music and even ballroom dancing.

Ms. Strasheim has a very impressive resume for her volunteer work for Opera Omaha. She currently serves on the Advisory Board and has served on the board of Directors, Opera Council, and was Guild President more than once. Another enjoyable note, she was the first woman President for the Opera Omaha Board of Directors. She has also chaired many events and fundraisers for both the Guild and Opera Omaha. She is admired for her gift of time and commitment to opera.

Sarajane King has been named a Partner in Excellenced by Opera Volunteers International.  She was nominated by Cincinnati Opera Guild on the occasion of Cincinnati Opera’s One Hundredth Anniversary.

Sarajane joined the Cincinnati Opera Guild as Co-Chair of Membership in 2003, and in 2004 became Vice President of Membership and a member of Guild Executive Committee, serving in this capacity six times over the years.  Over the years, she introduced new members to the Guild, led the welcoming and orientation process and found new ways to engage Guild members.  Sarajane became Guild President in 2015, a season that reflected her great leadership and volunteer focus through the whirlwind of Cincinnati Opera’s 95th Anniversary Season, including coordinating Community Ambassadors, Opera Raps, Opera Outbound and many Guild programs and events.

Sarajane possesses the special skills to engage, encourage and harness the support of all different kinds of people.  She always works to improve the opera experience for everyone, whether it is volunteering for a fundraiser, coordinating volunteers for school programs, greeting guests at events, or bringing a dish to the Guild’s Artist Meet and Greet events for each opera cast.

.  THE DEADLINE HAS BEEN EXTENDED TO MAY 31.

Click here for the Partners in Excellence Nomination Form for 2021.

This website uses cookies to improve your experience while you navigate through the website. Out of these, the cookies that are categorized as necessary are stored on your browser as they are essential for the working of basic functionalities of the website. We also use third-party cookies that help us analyze and understand how you use this website. These cookies will be stored in your browser only with your consent. You also have the option to opt-out of these cookies. But opting out of some of these cookies may affect your browsing experience.
Necessary Always Enabled

Any cookies that may not be particularly necessary for the website to function and is used specifically to collect user personal data via analytics, ads, other embedded contents are termed as non-necessary cookies. It is mandatory to procure user consent prior to running these cookies on your website.